Eagle-eyed followers of my blog will remember a few months ago I posted a Q&A with Surrey-based filmmaker Gary Thomas about his career and autobiographical project, and you should check that out here for a fascinating insight.

Today I want to share with you Gary’s latest project in the realm of short film and why you should consider backing it!

Gary is working with his long-time collaborative partner Mark Lever to make this summer an ambitious and unusual new film called Extra Time – about a time-travelling football player who tries meddling with the mists of time to save his teammates from an untimely end.

I’m excited about this project for a number of good reasons. It’s a step outside both Gary and Mark’s comfort zone as filmmakers and will present some intriguing but also enlightening challenges that will make a valuable experience with which to develop their careers. The script is ambitious and entertaining with an original premise, plus the team have already got some sci-fi stars on board in the way of Charlie Ross (from the Doctor Who audio plays) and Louise Jameson (companion to Tom Baker’s Fourth Doctor in the 1970s) to make Extra Time stand out as a truly galactic endeavour.

Gary and Mark are also pushing their boundaries to a new form of fundraising in the form of an Indiegogo campaign. This is another new step for both Gary and Mark and I feel it’s a further democratisation of the arts and they can benefit hugely from it.

At the end of the day, I wouldn’t be telling you this if I didn’t think Extra Time had the great potential to be a cracking little independent film. It takes a lot for me to back things financially but I do think Extra Time has a great potential to utilise Indiegogo to great effect to further the careers of two very talented filmmakers but also to make a really entertaining product with some great production values.

Gary especially has form for making really successful and innovative short films – his great split-screen film The Dog and the Palace won a distinction for it’s connection to the 2012 Olympic Games and was a great example of innovative filmmaking with great production values for a small budget!

Your donation could make the difference between Extra Time looking like naff 80s Doctor Who or Pacific Rim. Have a look at the campaign page, watch the pitch video and hopefully give the guys a hand in their new film! 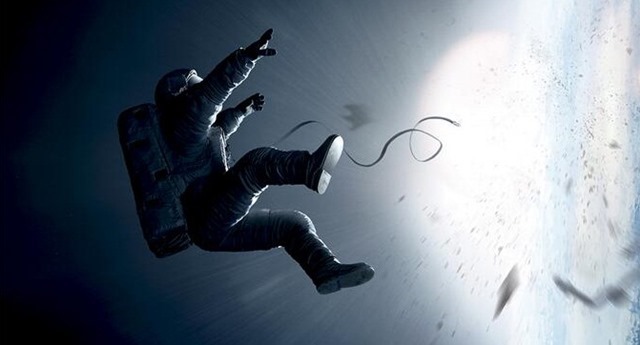 A lot of people have recently been discussing the new sci-fi film Gravity which has been released to pretty good reviews and praise. For me, Gravity is the latest in a long line of films I’m not at all excited for. Let’s discuss.

Carrying on with Gravity: my reasons for ignoring it are not to do with the content or perceived quality; rather, I really don’t bother with films as a medium for storytelling. I can count on one finger the films I’ve seen at the cinema in 2013 – a showing of the filmed version of Jeff Wayne’s War of the Worlds: Alive on Stage; the only reason for that was because I had seen the live show in person and wanted to relive it; ergo, I knew exactly what I was in for. For the record, the show was excellent and you should buy the DVD!

In terms of pure practicalities, seeing a film at the cinema is a pretty expensive experience. In a world where on-demand entertainment is fast becoming the norm, and affordable to boot, paying upwards of £10 (usually nearer £15) is akin to buying a DVD and only being able to see it once, albeit on a rather large screen. I won’t even mention the popcorn!

By the time I get an opportunity to see a popular film in the cinema, anyway, everyone else in my social circle has seen it and usually isn’t eager to re-watch. Sitting in a cinema alone is possibly the worse experience to be had. The Simpsons Movie, for instance, was much more enjoyable with a friend to laugh with, and to see each other laughing. It’s a weird sense of validation that one doesn’t get on their own. I certainly don’t get excited about a film coming out as I can watch it in my own time by renting the DVD or using an online service! There’s no appeal to entertain the cinema environment on the arbitrary terms of the film promoters.

Stylistically I’ve found quite a lot of recent film trailers I’ve seen (for I’ve not seen the films themselves) all too forgettable. Yes, these are supposed to sell the film in the space of a minute but all seem to play to the idea that spectacle – and a few choice “sound bites” sells. Flashy visuals and fragments of witty or meaningful-esque dialog are not enough to commit me to spending 2hrs+ attempting to immerse myself in the story. Performances are usually alright but I always get the feeling of being sold a movie on its “star power” rather than the plot, which seems to be secondary to a lot of the movie-ization process.

Immersion, while we’re on the subject, is something I really struggle with. There’s no time to muse on what’s just happened – there’s another grandstanding visual effect to look at! Films by their nature are limited to compromise on storytelling to fit the narrative into both the running time and linear structure. There’s only a finite amount of plot you can squeeze into twenty-four frames per second. There’s no going back to re-interpret the scene or see how it affects what you’re currently – I should say, were just a second ago – watching. With book adaptations a lot of the nuance of a story is chopped out to make it “marketable”; a great example here is The Hunger Games which lost quite a bit of dramatic oomph to appease censors and make the film more marketable to a wider audience. Artistically, graphic violence would’ve sold that film as a lot more believable and visceral but alas, Lionsgate wanted the film to be more accessible and naturally more profitable.

The Hunger Games was a pretty average film of an above-average book, one which I enjoyed. The film… well, it’s forgettable. Even now, I feel film cannot compete with the imagination of an engaged reader immersed in a well-crafted world.

If there was one film “event” that I could definitely say turned me off of the cinema it would be The Lord of the Rings. I won’t go into detail about why I dislike this franchise but suffice to say, if I can be put soundly to sleep by two films, it’s not a good sign for the medium. It’s an inverse of the problem of plot-over-profit issues with The Hunger Games, and demonstrates both ends of the scale are calamitous: The Lord of the Rings was an unreadable book made into an even more unwatchable film. Rather than struggling to remember the scant plot that whizzes past at the speed of sound there was a ton of plot regurgitated in the face of the overwhelmed viewer and which moved at the speed of absolute treacle!

In any case, cinema fails to grab by attention because it does the work of my imagination for me, leaving me with little to do but be a passenger in the experience. Where this experience is lacking, gaudy and overtly “out-to-impress” visuals attempt and fail over paper-thin plots. Heck, even Star Wars can be watched with just the sound in the background and you’ll get a general gist of what’s going on!

I have been pleasantly surprised on occasion – for films like Moon and The Social Network have had an impact because their message remains. The production doesn’t get in the way, and the message is not too convoluted for the medium itself. But largely these sorts of films are exceptions to the rule. I’d just rather get comfy on my own terms, in my own space and enjoy a book, bit of music or a TV show in my own time and at a pace that suits both me and what I’m engaging in.

As for Gravity? I’m sure it’s enjoyable and nice-looking but, well, ultimately its medium, well, lacks gravity.

Oh, and I’m aware that the title should  technically be “The Movies and I”. This had a better ring to it! Bring on the discussion in the comments below!