I’ve generally been trying to use my local library – Sutton Central Library – more as a workspace that inspires concentration as one of the worst traits I know I have is that I procrastinate like mad at home. Over the weekend I spotted a poster in the lift for an upcoming series of free creative writing workshops taking place over the summer. Intrigued, I signed up, and went along with Gary Thomas. The inaugural session took place on a couple of days ago.

I had previously attended a creative writing-themed session at Sutton Library some time ago, talking about self-publishing, which I still maintain an intrigue toward, despite my plans for my work-in-progress novel The Thaw to be traditionally published. That session was a bit of a let down as the speaker didn’t seem to have much faith in the aspects of self-publishing that I, certainly, held most interest in – their work was self-funded and the lack of an expression of faith in editors, or any discussion of online marketing, left me leaving underwhelmed.

Nevertheless I approached this new session open-minded. And I was pleasantly surprised! Walking away I was feeling, honestly, quite reinvigorated. It was a casual affair that took place in the library’s new Family Lounge and was hosted by Sutton Library’s writer-in-residence Rachel Sambrooks. We had a good group chat discussing why we write and that writing can be, and indeed is, an extension of ourselves. The conversation was good – there was a decent turnout of a diverse range of writers – from myself and Gary who are fairly experienced at the craft to people who’d read but never written.

I applaud them for having the courage, frankly, to come along as it can be daunting, even to someone like me, to face a group of people when it comes to one’s writing. Also in attendance was vlogger Aridja Kals – who came a fair distance to attend! – who made some great points in the discussion that Rachel led that we shouldn’t be afraid to fail at creative endeavours. The theme of the first workshop was based around a quote from Bennie Brown: that the search for instant perfection is the enemy of innovation. I definitely agree that that feeling is a barrier to writing that people seem to unfairly place upon themselves – there’s an expectation with creativity that things will emerge from the forge of one’s imagination perfectly formed, when it’s really not the case, and it’s absolutely fine! It’s so important to not reject one’s work off-hand and I was glad that was one of the first things Rachel imparted upon us – I certainly appreciated the refresher! But also I feel it was a good piece of advice to perhaps “mythbust” the craft of writing to those that might feel daunted at the prospect!

Aridja made a good point in the discussion that it might be useful to see the word “fail” as a retroactive acronym for First Attempt At Learning. I agree and Rachel made an important point that “failure” is perhaps not the best term for attempting something – which to some in the group proved totally new – and realising that a particular piece isn’t working. We as writers need to be willing to throw an idea against the wall to see if it sticks in order to create and develop from that.

From my own perspective as a writer I feel that’s really key, and I was pleased that this was discussed at the workshop. Sometimes it’s too easy to psyche oneself out of writing, especially if it’s either outside of their comfort zone or a totally new endeavour – but I try to counter that in my own mind by reminding myself nothing ventured, nothing gained. And it’s an important tool in all aspects of learning to attempt new things and then identify weaknesses and strengths and work on those areas. Sometimes a story or a piece of writing just won’t execute well and that’s fine; it doesn’t all boil down just to skill – identifying that a piece didn’t work is a skill in itself.

It was also good fun to have a go at a few writing exercises. Based on the earlier theme of “failure”, Rachel asked us to come up with a list of ten “failures” that might happen in life – an exercise that I found surprisingly difficult on the hoof! We used these scenarios to then have a go at some free writing – again, something I’ve not done since my university days! I was refreshed to see how quickly the words ended up flowing, and when the time was up I did want to continue!

We were urged to not necessarily rely on laptops for writing. I’d brought mine but had also packed a notebook and pen, almost foreseeing this. Writing freehand did feel a bit more personal and artistic, as if the words flowed in a purer sense through into my scrawl. It was definitely refreshing, even if my wrists were a little sore! I’m buoyed by what I had written and I may even continue it! Certainly the session reaffirmed in my mind that it’s fine to write pieces just for practise and not all pieces need be ones to submit or get out there. Writers need practise too – and if good ideas result from that practise, all the better. 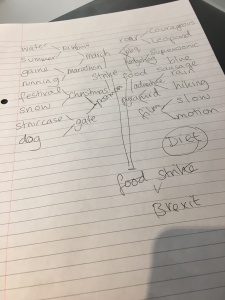 The session ended with a game of lateral thinking that I found more useful than I’d otherwise expected – word association. Initially we started with a group effort but split into individual attempts and I found it a refreshing challenge – the most challenging part of both exercises being the plucking of ideas and snippets from thin air, though I will persevere! It’s a useful and key skill to keep supple in my writer’s arsenal.

Honestly on reflection now I found the exercises hard as it does tap into that ethereal ability to conjure ideas on the hoof out of thin air. This is always the hardest, but arguably most rewarding part of writing I find, and I appreciated having to stretch myself!

I was certainly glad that I went to the session at the end of it – it reminded me very positively of my university days where my peer group would workshop ideas together. Those were arguably the most valuable sessions from university. I’m definitely going to keep going to these sessions at my local library – they’re free and it’s no real trouble to get to, and it’s nice to be surrounded by like-minded writers again! Excited for next week now!