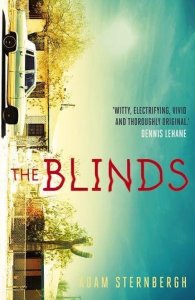 The Blinds is one of those books that piqued my interest on the table in Waterstones ages ago that I only just decided to bite the bullet on. And I’m glad I did; as I devoured most this book in the course of two train journeys. That was fun.

I recall the premise of The Blinds caught my eye. A sleepy, forgotten town in the middle of a desert inhabited by people who’d chosen to have their memories wiped, and given new identities.Eight years of anonymity rocked by a series of murders. A killer in their midst. This is just the sort of thirty-minutes-into-the-future science fiction thriller that I’m trying to be better at reading. But The Blinds isn’t really a science-fiction book – yes, how people’s memories are selectively wiped is touched upon and explained. Instead the book focusses more on why people have had their memories wiped, and the repercussions what this does to the human condition.

The book takes perhaps the more interesting perspective of examine what this technology does to people. Indeed throughout I took away the sense that the story wouldn’t have a happy ending. Certainly from the off we’re presented with an unusual take on the crime techno-thriller that weeps with foreboding and leaves a definite imprint on the mind. I recall the first chapter being intriguing, urging me to dive in.

But enough about themes for now – let’s dive into the nitty-gritty!

The Blinds is powerful, atmospheric and tense. The town of Caesura, the location for the tale, is a remote outcrop set up to house the “volunteers” in the experiment. Already the story is being kept away from the rest of the world, and the isolation is palpable, ostensibly for the protection of the residents but also it serves as a narrative device to keep the characters in a confined space. And yes, despite being in the midst of the Arizona desert, the setting of the town, a run-down, almost-forgotten collection of bungalows and chalets, feels contained. The events of the story are clearly never meant to leave Caesura, and it’s when they begin to spill out that trouble brews.

Indeed, whenever the residents of Caesura have any interaction with the outside, trouble comes knocking. The premise states that residents, with their memories erases, are indeed free to leave the settlement, they do so at their own risk, and some are never seen again. Early on we learn that The Institute administers the programme, and quickly we become suspicious. What is the Institute? And how at-arms-length are they keeping, how benevolent are they and what are their motivations? Early on I became fairly intrigued to learn how they stood to gain from the programme – it couldn’t entirely be a philanthropic application of new science? And this leads on to the liaison with the government between the town of The Blinds and the Institute. And even the new arrivals that we the viewer follow as they are inducted into the programme. As the plot progresses, these outside influences converge to really impact upon the town.

The premise of having selectively wiped one’s memory (ostensibly as an alternative to prison, to somehow absolve oneself from their crimes; a plot device that reminded me very much of One Way, which I read previously) allows for a unique opportunity in character development. The characters choose their own new names, from a list of former Vice Presidents and movie stars, which is a cool and innovative way of naming characters. But there’s always the interest in revealing these people’s real names, almost more so than their crimes, that does drive the reader on. And none of these characters, as we discover, is a white night or a dark horse; indeed, some of the expectations we have are reversed as the mystery unwraps.

Certainly The Blinds is dealing with some hefty themes – but I was most pleased to realise that the plot behind these themes is strong enough to motor through without becoming too self-indulgent. The story lasts about as long as it needs to in order to convey those themes enough so they persist, ironically enough, in the mind of the reader. Overall the plot itself is interesting enough that readers who may be less attuned to picking up thematic riffs can still enjoy the book – it’s a solid, atmospheric thriller with a dash of Western and a dash of science fiction.

It’s also partly an interesting ethical tale – we have characters that are neither black or white, and the book itself openly ponders why this amazing technology is being used for the lowly task of giving criminals a second chance when there are so many more “worthy” applications. Purportedly there are “innocents” that have been seeded in with the guilty or the witnesses to atrocities that are escaping those memories. But as the book progressed we start to question whether what we’ve been led to believe can be taken on face value. And soon enough nothing we may have assumed as the tale progresses can be trusted. It’s riveting. Overall I found it just added to the unsettling, not-quite-right tone that struck a chord for me.

Prose-wise… it was perfunctory without being overwrought, and I don’t mean that derogatorily. The Blinds employs a light, transparent prose style that I do approve of; it allows the story to flourish through it without wrapping itself up. It’s light enough to carry the action and the plot as demands but not flimsy; it conveys the themes that the author’s clearly putting across – that of what it means to lose one’s sense of identity, and as the back cover states: “identityloss [and] meta reality” – quotes that did somewhat concern me, as I am not really a massively literary reader but there was plenty of plot meat on the bones, so I came away pleasantly surprised.

Give it a read. 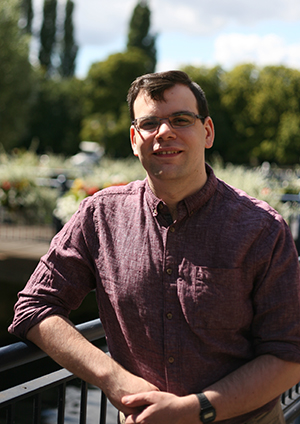