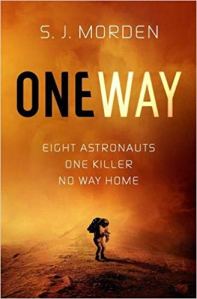 I really enjoyed The Martian and it remains one of my favourite books. So, approaching One Way on the shelf at my local bookshop… it intrigued me. A skeleton crew working against the odds on the surface of Mars? Colour me fascinated. And the twist that they’re all convicts intrigued me further.

One Way pits Frank Kittridge, convicted of murder, at a crossroads: face a lifetime behind bars or serve out the rest of his sentence on Mars, helping to construct the first permanent base on the planet’s surface. There are no bones about the offer: it’s a one-way trip. Frank knows from the off that he’s being used, and we’re quickly established what skills it is that Frank has that made him eligible for the project.

But let’s not get ahead of ourselves in terms of the plot. Frank is a relatable everyman that the audience at large won’t struggle to relate to. He’s also the most well-developed character – his backstory isn’t unique; he’s not a bad guy, but a victim perhaps of his own morals. He killed one man – his son’s drug dealer, a backstory that while plain vanilla is relatable, I suspect intentionally. This establishes Frank as a man who does things like this only at the end of his tether, when the cause is just enough in his eyes, if not the law’s. I didn’t dislike Frank as a character – again, a criminal with morals is an interesting dichotomy to take, but ultimately Frank is no career criminal, nor does he relish what he did.

The other characters we’re introduced to are less well-developed. Frank is joined by a crew of six other convicts that have made the choice to be sped across the stars than stare at the same four walls. Some of them are archetyles – Dee, the classic “boy genius gone bad” being one, but there’s certainly some interesting subversions of expectations – One Way is unusual in a book where the reader is genuinely shocked with a neo-Nazi, with whom we almost begin to sympathise, on a human level, is dispatched in mysterious circumstances.

This I feel is one of the key strengths in One Way – it subverts what we expect from the characters – yes, they’re criminals, but they’re also human beings. That’s not to say their crimes are waved off but it explores the depth behind the characters’ criminal status, and one of the most impressive things it leaves behind is whether we, the reader, judge too quickly on the basis of criminality. It’s certainly food for thought.

Supervising Frank and his posse is the inflexible superintendent Brack, whom harbours an open hostility to the crew; if you like, Brack’s attitude – dehumanising and shallow – counters nicely the impression the author seeks to make with the characters discussed above.

Naturally, with a crew of criminals on the surface of Mars, things begin to go awry fairly quickly. Bodies begin to pile up, as does the atmosphere – when there’s only eight humans on the whole planet, the tension really begins to ramp up. I did feel in a way that the supporting cast in this relatively concise book were a little disposable – most of the narrative effort is spent on building Frank’s character as a custodian of the other crewmembers, and the closest we see to Frank having a kindred spirit is the first to perish in what seems like an accident at first.

There’s a taut, choking feel to the narrative, especially with the crew dropping steadily. The unfortunate accidents that befall the crew, one by one, just as we think the characters have hit narrative stability, prove to be less “accidents” and more foul play. This realisation, and the finger-pointing that threatens the tenuous bonds between the crew, spins the narrative into a higher gear. The ante, and the tension, taughtness that defines One Way piques, and it’s gripping.

The whole atmosphere of One Way is cloying and claustrophobic and it works so well. It’s not a long book but packs a definite punch. Knowing that there’s a murderer on the loose on Mars really adds to the tension as the group dynamic breaks down as suspicions boil up. Marooning the crew on Mars is the ultimate no-escape situation, and the tension really builds up to the final confrontation.

One Way features a macro as well as a micro narrative that plays out through the emails and correspondence from executives of Xenosystems Operations, the “evil corporation” that controls swathes of the economy, including privatised prisons, that preface every chapter. Of course, the Mars Base is being built by XO, the company personified as your pretty standard amoral corporate giant, by convicts for one reason: cost. Clearly this is a message the author wanted to obliquely nod at, and while it’s not necessarily one I’d subscribe to, it works well in building up the tension. Notably, the dehumanisation of the crew by the company’s interest underlies that message – a powerful indicator of this for me was the fact that the crew can’t find their personal effects on the Martian surface; we the reader find out that the company, to save the cost of transporting that weight to Mars, incinerated the personal effects.

This stripping of the humanity of the convicts is a powerful, if somewhat didactic, plot device. As I said, I identified it as a clear narrative choice, perhaps pertaining more to the sci-fi tropes of Evil Incorporated, it worked for the purposes of the narrative. It’s a good counter to the spirit and camaraderie that is plain to see through the convict crew, with some moments of genuine heroism and character connection that tug at the heartstrings just enough for the tension that follows to really hammer home.

The cliff-hanger at the very end of the book, when the tension of the plot reaches a crescendo, already has me looking forward to reading No Way, the recently-announced sequel. Overall, I was very impressed with One Way, and I look forward a great deal to picking up from the brutal conclusion in the sequel sometime very soon!

One thought on “Review: One Way (Paperback)”