I was originally advised not to title this post my “Book of the Year” as none of the contenders were published during 2014. However, I have chosen to disregard this advice.

2014 has been a great year in terms of reading and I’ve enjoyed some thoroughly gripping stories through my Kindle. As such, I’d like to identify a few really notable reads I feel have been especially awesome this year!

3: One by Conrad Williams 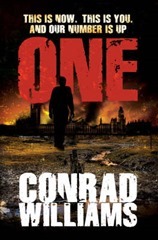 “The descriptive writing in One is haunting but beautifully bleak. Towns are destroyed, the dead laying as heaps that don’t decompose. Roads and their traffic lay smashed. Life is simply frozen by the Event, never to resume. The nature of The Event is alluded to by several characters but the concrete truth is never explicitly stated; nor does it need to be. It happened, and that’s enough.”  – from my review

I really did enjoy One, which I discovered almost by chance languishing in a saved list from a good web buddy of mine. The world-building (ironically of a devastated UK) was sublime and the atmosphere palpable, with the distress of the protagonist and the rest of the cast shining through the unending bleak and desolate nature of the narrative. The ending really left me thinking, even to this day, and when a book does that it’s one worth reading.

2: The Martian by Andy Weir 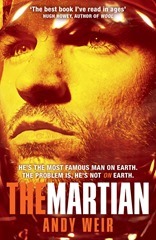 “There’s a sense of friction between the characters but this is not in the aid of any ulterior motives, just the search for a better or more successful way to spend billions of dollars to save one guy. There are vested interests but overall the dedication from an organisational and societal standpoint to not abandon Watney and want to save him is pretty endearing.” – Review excerpt

The Martian was a birthday recommendation from a group of close friends in February and I was again pleasantly surprised at how much I enjoyed the book – a funny, likeable protagonist; well-researched and feasible science writing that showed the author’s attention to detail and a refreshing vibe of altruism – there is no “bad guy” per se but it remains a tense and thrilling adventure.

1: Ready Player One by Ernest Cline

“The cover of Ready Player One pits the book as “Willy Wonka meets the Matrix”, and I really couldn’t put it more succinct than that. The plot moves at a rocketing pace but there’s plenty of time to see Wade’s character develop and relationships blossom.” – from my review

Another absolute home-run in terms of recommendations from nice online folks, Ready Player One was truly a read that I didn’t want to finish. The book is unashamedly geeky, with a great cyberpunk adventure threading its way through some classic (and obscure) pop-culture references. I may have deemed myself a little young for some of them but it didn’t stop me thoroughly enjoying this book! It’s one that I feel has profoundly impacted me as writer as it gets to many things right. Easy choice for Book of the Year!

Special kudos to friends Sam, Si, Dan and Chrissy for being the brains behind getting these books onto my Kindle; I’m really appreciative. Although I’ve ultimately had to make a choice in terms of ranking, all three titles are absolute stonking reads, and I look forward to delving into more of these authors work in 2015!