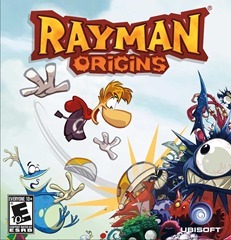 Nostalgia is a great thing, especially when it revives an interest in something I’d not experienced since my childhood. A good friend of mine recently recommended platform game Rayman Origins to me and I jumped in – Rayman was a franchise I’d not dipped into since the original game for the PlayStation. I expected good things and wasn’t disappointed.

As a pure, old-school platformer, Rayman Origins features a simple premise: Rayman (or the character you elect to play as; a selection is unlocked as you progress) must free as many Electoons from their cages as possible to restore the balance of the game world. These cages are usually hidden in secret areas of levels or amongst elaborate traps and puzzles. Additional Electoons can be freed by completing each stage to a certain degree of competency measured in the number of “lums” collected; I frequently called the lums “tings” in error in a nostalgic callback to my time playing the original game. 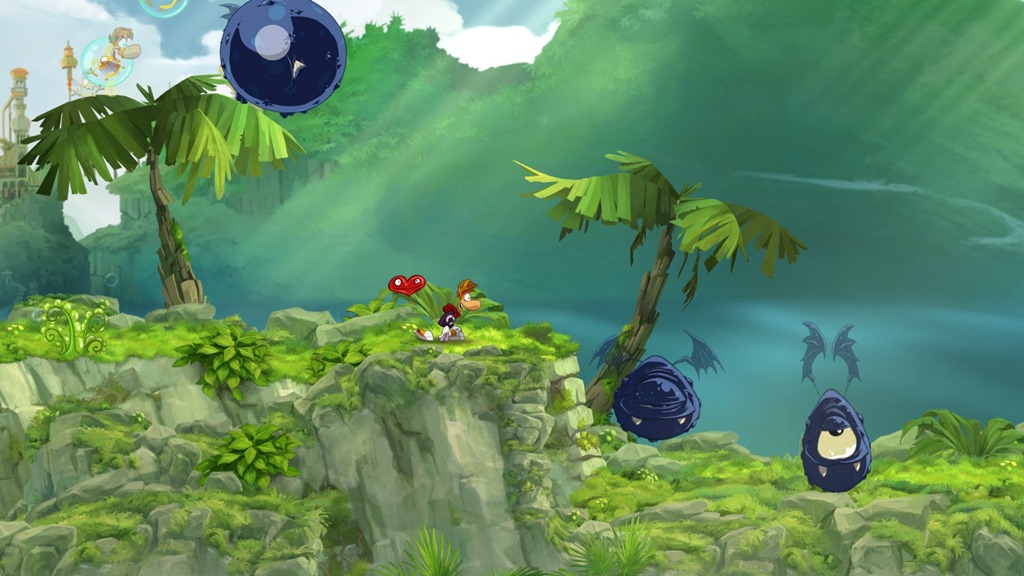 Rayman Origins is not a perfect game, but gets a lot right (and a lot wrong, but I shall discuss that later). Artistically, it’s a standout title that I can’t commend highly enough. The graphics are joyous and  whimsical, slightly cartoony and giving the impression almost of a “kids game” when it’s anything but. I really enjoyed experiencing some truly beautifully sculpted levels. The cel-shaded animation style is refreshing, crisp and engaging. Vivid colours and exciting effects drew me in and kept me playing, as traversing frankly beautifully layered levels was simply enjoyable. Standing out for me was the “Gourmand Land” levels that are a juxtaposition of ice-cold and red-hot, but avoid the typical snowman and lava tropes in an inventive, whimsical and fun way – instead of dodging lava monsters and snowmen the character glides through levels filled with dragon waiters, lemons on forks and giant chilli-fuelled heat streams. One overall theme I didn’t really approve of was the overall raunchiness in the design of the fairies that granted additional powers.

Game controls were smooth and responsive. I played the PC version at full-HD resolution with a wired Xbox 360 controller and the experience of that setup was glorious. I had no issue remembering the controls for certain abilities that became quite intuitive, and I’d definitely say playing with a controller is recommended for this game.

In terms of music and sound, the game definitely joins my list of excellent game soundtracks. The music is perky, whimsical and, above all, fun, definitely fitting into the themes of each of the “worlds” the player explores. Generally the sound design is excellent and very appealing to extended exposure.

The player gets plenty of aforementioned extended exposure while playing Rayman Origins. The gameplay starts off simply enough, with new powers and abilities added at a reasonable pace. The levels get progressively more challenging, too, but enjoyably so until a point. Boss battles, for me, proved intensely frustrating and were, in hindsight, typifying of the game’s later level design: memorise moves and perform them with split-second precision.

It is this that nearly soured the Rayman Origins experience for me; the later stages of the game cross from challenging difficulty into punishing the player for tiny missteps. Some stages were so fraught with terror that I found myself sweating – gaming shouldn’t be this stressful! Simply put, the stage I felt I had to leave the game at was proving so punishing that I would know of failure within a few seconds of starting a run. It’s a terrible shame, really, but not unexpected; the original game was notoriously Nintendo Hard. It’s not the level of difficulty I have a problem with (there are no “difficulty levels” or finite lives so death is meaningless to Rayman himself) but the cliff-face that the sudden spike in difficulty presents. I felt I had to leave Rayman after the N-teenth time at this particular bugger of a level because I didn’t want dogged persistence and frustration to mar my enjoyment of the rest of the game. Persisting would’ve made me hate the game and that would be doing it a disservice; however, feeling unable to complete the game will adversely affect my score.

Plus, my Xbox Controller for Windows couldn’t take any more of my stress!

Overall, I enjoyed Rayman Origins immensely, and would heartily recommend it to those after a world-class platform experience but I was disappointed that the unfair (I feel) difficulty spike spoiled the game somewhat near the end. Rayman Origins from it’s 2D art style and gameplay is a fitting homage to a classic 90s game, and an example of revisitation of revered franchises other publishers would do well to follow. Regardless of the issues of difficulty, I’m glad I gave the game a go and I’m excited to play on with Rayman Legends later!