There’s a lot of strategy from simply choosing your side in any given match. Some nations have different and disparate abilities (for example, additional population, economic benefits and other bonuses) and unique units that lend themselves to a different play style. With eighteen nations to choose from the possibilities are pretty numerous! Maps feel smaller scale than Civ, where a game would encompass an entire planet; Rise of Nations feels more akin to playing in a certain region. This, while sounding bad, does lend itself to the game’s most interesting mode: Conquer the World, which is elaborated on below.

As far as campaigns go, in addition to the more standard deathmatch games against a surprisingly challenging AI, there is an effective tutorial campaign based around eras in history that teach the player the basics of the game with approximations of famous skirmishes in history (for instance, the tutorial on Modern Age bombers and oil collection are themed around the opening stages of World War II) but the game hits flavour country with a selection of Risk-style “Conquer the World” campaigns in which the player endeavours to triumph globally, with a sub-game based around supply and tactics taking place on a Risk-esque global map and individual battles being fought as customised scenarios in the game proper. There’s a variety of CTW distillations available, ranging from Classical Greece to Medieval Europe to a very enjoyable Cold War scenario with DEFCON meters and espionage galore.

Rise of Nations really did a great job of distilling the classic and epic Civilization gameplay into a frenetic and altogether more approachable – and arcade-like – rendition. The gameplay is compelling – most deathmatches can be wrapped up in an enjoyable hour and the Conquer the World campaigns picked up at will. The “Extended Edition” re-mastering for Steam had to do more than simply bring a classic game to a modern and ubiquitous storefront, and largely succeeded. 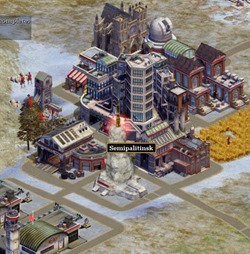 Graphically, the game remains a 2D, isometric RTS, and unfortunately the models used for units look unchanged; tanks still lack turrets that move and the more blocky units remain the games weakest graphical assets. The UI is merely stretched to fit more modern HD resolutions, resulting in a lot of blank space that goes unused and, oddly, the mini-map becomes more off-centre the higher resolution the game is played at, which is a tad disappointing. That said, the palette of subtly different buildings and units across the epochs adds a lot of variety to the scene, preventing homogenous armies differing only by colour dominating the late-game. Model quality for buildings and terrain remains attractive, refreshing and crisp. There’s also a satisfying new ‘wobble’ of buildings across the map on the detonation of nuclear warheads, adding to their apparent power. Clearly the game’s 2003 vintage exposes limitations in the game engine, but kudos to Skybox (the developers of the re-release) for wringing whatever they could. Oh, and Rise of Nations runs at a beautiful 60 frames per second.

The soundtrack remains as good as it was in 2003, the cues still instantly recognisable from my days playing this game eleven years ago which is great. The AI still remains challenging to a human player, and gets especially trigger happy and genre-savvy, wanting to win the game itself. I do wish map size and variety had been increased but the terrain generator still surprises me. There’s also improvements to multiplayer and the addition of Twitch.tv streaming which don’t interest me at all.

When it comes to other improvements, I feel there were a few tiny missed opportunities to clean up some of the more irritating UI traits – why, when I have numerous Barracks, is research queued up at one and not spread across other, idle buildings? This may seem like irrelevant minutiae but whilst in the heat of battle and when racing through the ages this can have a considerable impact. I also wish the game could zoom out a bit more on high-resolution displays so I can see and command more of my armies.

Generally I’m extremely happy with Rise of Nations: Extended Edition – a conservative but measured and refined re-mastering of a fine game of yesteryear. I look forward to spending many more happy hours cursing at Pericles for building the Colossus before me and sending my Strategic Bombers to level it accordingly.