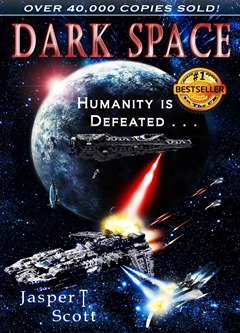 I recently finished Dark Space by Jasper T. Scott and I was pleasantly surprised, so much so that I find my faith in self-published Kindle sci-fi quickly returning!

Dark Space is a very readable space opera that centres around a weakened humanity forced by a war with the alien Sythians a decade before the narrative that forced the survivors to mete out their lives in a lawless region of the galaxy known as Dark Space. It is this lawlessness that leads the protagonist, Ethan Ortane, to infiltrate the surviving remnants of the Imperial Navy – the only force maintaining any sort of order among the last vestiges of humanity, in order to clear his debts and maybe continue the search for his missing wife and son.

Scott writes excellently and the prose is refreshing and easy to read – ones eyes glide through epic space battles and tense moments between characters. I was particularly impressed by the staging and execution of some pretty sweet space battles, one of which hooks the reader at the start of the book and is later returned to as the remainder of the book fills out why the battle is taking place. I found myself eager to read on to find out the outcome of the battle I’d been thrown into from the start. The scale and ambition of the battle sequences and the universe as a whole is commendable and I look forward to seeing how the plot progresses in the next book!

The first instalment was just long enough to pique my interest without becoming a slog to the end. While a longer work would’ve been no doubt enjoyable all the same given the quality seen here, the plot didn’t feel overlong; in fact, the main plot didn’t need padding out in this instalment. Dark Space is clearly a first-in-a-series book and there’s plenty of seeds sown for the upcoming books to continue the story!

A few minor niggles come to mind: the science is pretty standard space-opera fare and is hardly ground-breaking, though in this instance an enjoyable yarn means wheel-reinvention is ultimately unnecessary and would merely impede an enjoyable read. There is a little bastardisation of language in regards to characters profanity: characters in Dark Space swear, alright; but with mutated forms of common expletives. In writing Colonisation I was advised by a good friend to either let characters turn the air blue or to not bother at all: it can convey emotion and tension but this is somewhat negated if the character’s frekking lose their bottle mid-flow. I’d be interested to see if this is a conscious choice by the author on their part or an extension of the universe the book takes place in.

Overall, I was pretty impressed with Dark Space! I read it in just over a week which is pretty indicative of how I enjoyed it. I’ll be dipping into the second book of the saga very soon!

Be sure to grab Dark Space online here, and check out Jasper’s website here!