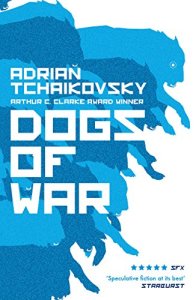 I picked up Dogs of War recently as a charity shop purchase – I was wary on buying it as I didn’t have a great experience with Adrian Tchaikovsky’s Children of Time at all. However, it was an inexpensive purchase and the premise of the book seemed intriguing, so I was happy to exchange some coins for it.

A book about biologically augmented dogs (and other creatures, but more on that later) being used in a dystopian near-future to fight humanity’s wars has the potential to be really quite gripping. And indeed, the opening parts to Dogs of War are quite effective as we follow bioform Rex and his cadre of augmented animals as they are used in a war in Campeche, Mexico against the Anarchista rebellion. This purpose is ostensibly that but the conflict quickly becomes the private war of the commander, Murray, who utilises the bioforms to commit a variety of quite brutal war crimes as he is left unchecked. Indeed, any attempt to interfere or provide oversight is met with hostility.

Had Dogs of War stayed in Campeche it would have been a very gripping, atmospheric and gritty book that explored the horrors of humans using augmented animals to fight wars that human soldiers aren’t to be “wasted” on. And indeed there’s plenty of ethical strife for Rex as his augmented intelligence clashes with his literal programming – he obeys his Master – Murray – because he craves the euphoria released by his feedback chip from being a Good Dog; likewise the fear of being a Bad Dog is tantamount in his mind, and there’s plenty of mileage in exploring what happens when Rex is unshackled from that hierarchy and has to make his own decisions.

However only the first quarter of the book takes place in the Mexican battlefield and this is where I feel Dogs of War quickly unravels.

The book pivots to be a political procedural of sorts that focuses on using Rex as a means to bringing Murray to justice and a more wider ethical exploration as to whether the bioforms are things (which can be destroyed) or sentient beings which deserve their own right to coexist alongside humanity.

Even writing that synopsis made me realise that the idea itself isn’t bad; however it is a quite trite and tired narrative thread. And once Dogs of War leaves the gritty battlefield of Mexico and expands to the civilian life of the bioforms – focussing on Rex as he battles with his new-found freedom from his hierarchies – the narrative completely seems to vent of momentum. Rex’s journey seemed immaterial as I felt he was a tool – a thing, if you will – for exploring thematic ideas rather than a solid plot.

To compound the triteness there’s a scene where Rex crumbles when questioned in court when presented with Murray, and the trial of his former Master collapses. I quickly began to be irritated by the stunting of Rex’s character.

There’s parallel narratives, much like Children of Time and the Rex chapters quickly started to bore me, honestly. Rex’s character hasn’t much depth – indeed, underneath the augmentations he’s just a dog, and the battle against his Good Dog/Bad Dog mentality, even when it no longer has any material basis on his actions. Honestly, Rex’s simplistic point-of-view doesn’t do the action portrayed any justice – it’s the narrative style given to Rex’s point-of-view that sells the story short. His perspective and recollection of events is so insulated from the brutal reality that the situations aren’t done justice.

Rex’s point-of-view seems more like a report or log of what happened rather than narrative with any sense of character and the prose of those chapters is too clinical and disconnected to be effective, ultimately. The prose’s insulation from the action it describes bleeds it very quickly of any impact and it becomes a hybrid of a report after-the-fact to a simple running commentary. It’s very tell-y; and the maxim that the author should show, not tell seems to have been purposefully ignored.

I am suddenly much happier. I am moving on all fours, working out where to take cover. Bees is mustering her units. Dragon wakes up and slithers into a stand of trees from where he can get a good shot.

All the not-enemy humans are still running. Some of them will still be in the way. The vehicles are coming very quickly. Already the enemy are shooting. They are only hitting other humans, though: they cannot aim at this range when they are moving.

Honey’s Elephant Gun explodes the lead vehicle. She is pushing through the not-enemy, and I tell her she should stay back to use them as cover.

I feel Dogs of War fails because it’s cramming too many thematic and ethical ponderances into a short book. The final fifth of the book was a race to the finish, ultimately, and I found myself caring less and less for Rex’s point of view. Indeed it was only toward the latter stages of the book that I learned that Rex’s fellow bioforms are not all dogs – he is accompanied by Honey, a bear, Dragon, whose species I never quite nailed down and more ponderously Bees, a literal hivemind of augmented bees that just doesn’t get the weight of attention that such a concept deserves.

Indeed, the character of this group of animals is expressed solely, it seems through the “telepathic texting” that was solely expressed through Rex’s point-of-view chapters. I didn’t quite understand this – were they communicating through aforementioned telepathic texting in real time? How did that work? This confusion just added to the sense of deep disconnect from the characters that Rex’s chapters were.

Ultimately I think Dogs of War worked less as a novel but more as a bit of an indulgence of the author’s desire to explore this well-trodden path of the ethics of utilising augmented animals and determining where the difference between beings and things seems to lie. But more fatally I didn’t come out of it convinced – the plot was ultimately predictable in its denouncement of humanity’s instinct to use its ingenuity to figure out a both more “acceptable”, marketable way of dealing with human problems that remains totally inhumane.

Humanity comes out the bad guy here and unfortunately the limited narrative in Dogs of War just can’t sustain that. Ultimately the themes that drive Dogs of War prove to be an old dog, and there’s no new tricks on show here to speak of.

In Children of Time the narrative enters a stall in the midsection of the book from which it was unable to recover; in Dogs of War the thematic weight behind the narrative forces it out through a puncture in the constraints that kept it taught and once it escapes into atmosphere, it quickly dissipates into nothingness.