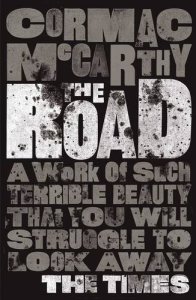 If a book irritates me within the first thirty pages, it’s not a great beginning. However – and this is a theme that recurs when discussing The Road – things don’t seem to progress or evolve; they start off as ‘crappy’ and are content to remain there.

“A work of such terrible beauty,” the review quote from  The Times states, “that you will struggle to look away.” We’ll see.

The narrative follows, allegedly, the journey of a father and son along a road. That is the start and finish of the narrative, as far as I understood anyway. We learn pretty much nothing about the characters – they don’t even get names; indeed, the only character that gets named, it is revealed, was lying about it – and we learn nothing about the world either. What is presented is, essentially, a very ‘plain vanilla’ destroyed world, with no hints as to what caused the disaster that befell the countryside. It just exists. Likewise, there’s little propelling the characters on their journey beyond it ‘being cold’

I get the experiment that Cormac McCarthy is attempting here with this book. Stripping down the narrative to revolve around two characters. But it feels so hollow. The characters have no depth to them; we don’t learn much about them, and they seem to exist for the sake of existing. Why is the story focusing on them, specifically? They’re exhibiting a fatal flaw in protagonists in that they are boring. I didn’t care what happened to them.

The prose, too, was squalid. Again, I understand the ‘experiment’ the book attempts – in a post-apocalyptic wasteland with no hope, what do conventions matter? But the lack of structure to this book makes it much harder work to read than it had to be. There are no ‘chapters’; merely blocks of text which read like shopping lists of events that happen and then don’t happen. There’s an abject lack of an atmosphere, and action – clearly these are genre tropes and trappings that Cormac McCarthy is desperate to avoid, for want of his book being described as genre fiction? The prose is so inconsistent and forced – going from utilitarian one moment to lasciviously over-embellished within the same sentence – that it torpedoes any credibility and authenticity that might’ve been there.

What made me angry about The Road was that I could almost taste the author’s thinly-veiled contempt for genre conventions that result in good books because it would interrupt the purity of his experiment in the form. Yes, abandon punctuation and chapter-isation, but have a narrative that either can support itself without those things and avoid writing plodding, dull prose. The Road stands out for me as one of the few books that can portray an earthquake as, essentially, something that happens and is never called back to.

The dialog is easily one of the most annoying and irritating parts of the book. There’s no conventions or punctuation, so even keeping tabs on who is speaking requires effort. But the majority of the conversations between the man and the boy seem to occur as follows:

Man: I know. We should go in this house.

There is nothing revealed through these snatches of dialog. We learn nothing about the characters, their past, their feelings through the dialog. Of course the boy is scared – he’s a child – and the man tries to reassure him. But the distance in their relationship, and the coolness with which they speak to each other, doesn’t feel like a man and his son. It doesn’t improve, either.

One of the things I learned – and has proved valuable advice – as part of my Creative Writing degree is that characters should undergo, over the course of the story, both a physical journey and a personal journey which changes who they are. In The Road, however, neither of the two characters of the man or the boy seem to undergo any sort of change. They remain as cold and distant to each other toward the end as they do at the beginning, which really made me question whether I should even become involved or engaged in their story. In terms of physical journey, the terse description of the world or situations of The Road made it feel like the characters move from point to point on a map, with the rest of the “world” left as a blank page. It’s not immersive, it’s not even a fully-constructed world (because, I suspect, that would be too genre) and seems artificially imbued with awkwardly-poetic language that just doesn’t sit well; clearly an attempt to move the reader for want of being moving. There’s no substance in The Road to really warrant it.

I contrast the bleak, barren atmosphere of The Road to a similar but infinitely better-executed One by Conrad Williams (which is a really damn fine book) – One and The Road are quite similar narratively but One has much more engaging, flawed characters who seem to change as the story goes on, and it’s tragic but beautiful, and the world is far better realised. The Road would do well to emulate the stark, harrowing environment of One. Yes, One addresses a somewhat similar narrative to The Road – a man’s search across a destroyed landscape for his son; a search which drives him, ultimately, to madness – but does so in such a more effective and gripping way it’s almost comical to put these books together: One is simply so much better written, plotted and executed. I would heartily recommend it over The Road in a heartbeat.

The Road is indeed a bleak, depressing book, full of unrealised potential. However, hollow prose that ditches conventions for the virtue of being experimental above all else, unengaging, flat characters who don’t undergo any kind of journey or give me any real reason to empathise with them and an irritating experimental nature that seems, subconsciously to show a certain disdain for the more accessible genre trappings of post-apocalyptic fiction means that I certainly won’t be picking up another one of Cormac McCarthy’s books again; I’m only glad this came from the library and not with my own money. Road to nowhere.

Buy The Road on Amazon.co.uk (if you’re a zombie)

1 thought on “Review: The Road (Paperback)”