I’ve recently been reading a fair few books by the late James Herbert, as recommended by a good friend! I don’t feel they quite warrant full-on reviews but I’m definitely going to reflect on what I thought of them!

This was unexpectedly enjoyable; as Herbert’s initial work, I was a little sceptical of whether he’d have found his feet with it but I was suitably impressed. The premise of giant rats running amok in London may seem a little trite in 2016; however, the descriptive work did gel nicely; some of the deaths inflicted upon the population of London by the rats are pretty gruesome!

The atmosphere of the novel does move quickly, but there’s always an apprehension of what the rats are going to do next. The set-piece attacks are gruesome and horrific – the rats begin seemingly mindless and merely massive but they do seem to have an intelligence that is taken for granted for a lot of the book. I did feel that the main character, Harris, fell into the trap of being a bit of an unremarkable “everyman”; I was more taken in by the vignettes that Herbert includes that build up the characters of the victims of the rats, giving the attacks a varied point of view.

The narrative was quite straightforward though it did leave a few lingering questions and was definitely atmospheric enough to hold interest. There’s also a touch of social commentary – why do the rats only attack the slums of London? Why isn’t anything being done about these slums by Government? – that maybe was more relevant in 1975 but it’s not too overbearing, and doesn’t get in the way of the action. It feels more a natural line of questioning in the circumstances of an invasion of giant rats. I found The Rats to be a short but punchy read and I thoroughly enjoyed it! 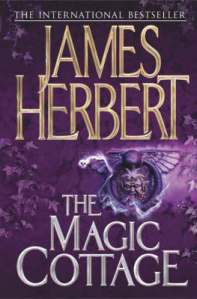 I’m not generally a fan of the supernatural or spooky so I approached The Magic Cottage with some latent reservation.

The Magic Cottage, like The Rats, strives to build and maintain an atmosphere – why dos Gramarye, the eponymous house, call out to Midge, the protagonist’s girlfriend in the way it does? There’s a lot under the surface, initially, they begs to be revealed and the layers are unwrapped as the book progresses. I found myself not considering it as “magic” per se, in the traditional sense, but as an aura that pervades the lives of the characters.

The “magic” in The Magic Cottage is both overtly good and bad, and while the good is seemingly just strange, inexplicable happenings it is the bad magic where I feel this book hits a home run, as it allows for the horror that seemingly is trapped in the protagonist’s mind to finally come out, and some of the descriptions of the horrific events that scar the characters is really well-realised and I can, even if I don’t fully subscribe to the supernatural, absolutely reflect on why it’s having the effect on the characters.

The characterisation is somewhat more memorable than The Rats. I’d, prior to this book, read Haunted and encountered David Ash, a cynical paranormal investigator whose cynicism is totally subverted. This is also the case with The Magic Cottage – Mike, the protagonist, seems to be the rational grounding that Midge needs. He brings a balancing effect to the relationship. However, in the book’s climax, his cynicism is also inverted and, I feel, the reader’s expectations and anticipations are subverted with the twist.

I like the subversion of cynical characters in Herbert’s work, as I feel it provides a fertile ground for a journey for the character to embark upon. Plus, even as a cynic in many aspects of life, it’s satisfying to see them proved wrong!

Buy The Rats on Amazon UK