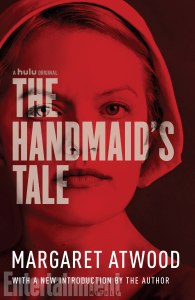 As some may know, I enjoy and write post-apocalyptic fiction and one of the most common titles that I get cited and asked “have you read?” is The Handmaid’s Tale and I can now say that I have. It was a thoughtful book that definitely got me thinking – a plus! I’m still unsure quite how I feel about it however.

What I found convincing in The Handmaid’s Tale was the sense that the Republic of Gilead, in which the story takes place, was a plausible and frightening theological autocracy, and the mood of the book certainly conveyed that. This society did seem regressive, scary and foreboding which is impressively executed; the most recent work to which I can draw an analog being The Children of Men, which I read first but was published after The Handmaid’s Tale.

I feel The Handmaid’s Tale and The Children of Men are very similar books – certainly on reading the former after the latter, it’s clear that PD James was influenced quite heavily by Atwood’s novel. They both have foreboding atmospheres portrayed with crisp prose that instils the sense of bleakness and resignation that the characters seem to exude until the latter parts of each.

Is The Handmaid’s Tale really a “feminist book”? I’d struggle to agree – I feel the plot rather extrapolates to an extreme the persecution of women under various contemporary extreme religious viewpoints, so (if anything) the book serves as a cautionary tale for the true believers. But does Offred’s rebellion against this system make therefore make The Handmaid’s Tale “feminist”? Again… no, as the system Atwood had created in the Republic of Gilead is and always was doomed to failure; yes it made characters suffer, especially those not compliant to an extreme and barbaric interpretation of religious doctrine, but is it feminist? No; I’d argue it’s more a polemic about the dangers of religious bigotry and dogma (the society of Gilead is flawed by constraining human emotion and the story highlights these inherent flaws) but I imagine there’s some that would argue that it’s more focussing on traditional patriarchal hierarchies. I did not read it that way or glean that perspective in particular, but people will read into it whatever they do (or do not) want to.

I’d rather focus on what, as a book, not a statement of intent or whatever, The Handmaid’s Tale does right and wrong. The setting and mood of the piece is excellent, and there’s a key admission that the theocratic regime cannot entirely contain the human nature for desire under the pretext of religion – so is this book less “pro-feminist” and more “anti-religion”? I would say so from my reading. There’s some chilling instances of characters being replaced and it helps to underpin the nature of the society that Atwood is creating in Gilead; the reasons for it coming about are left ambiguous which is a bit of a missed opportunity but the story is very contained so swathes of exposition into the backstory would be conspicuous.

That’s not to say The Handmaid’s Tale is perfect: indeed, I feel it’s a book I would certainly gain more from a second reading of; there’s a fair bit I only seemed to glean from research outside of the novel itself. The prose, while mostly crisp and taut, is at times feeling as it if is disconnected from telling the story to make a wider point outside of the story – there’s points Atwood wants to make using The Handmaid’s Tale and at some instances I feel she stops the story to make them. Whether the story of Offred quite fills the space Atwood is creating with this world isn’t clear – certainly the prose makes the story feel claustrophobic and tense, but at the same time is there much story there at all?

Atwood also managed to irritate me with her prose: some dialogue has no punctuation, some is regular. There seemed to be no “pattern” to this usage/non-usage which proved an irritation below the surface and impacted the comprehension of whatever point the author wanted to make. And the ending feels somewhat ambiguous and unclear which irked me, just as I felt the plot had begun to motor along nicely.

Overall though… The Handmaid’s Tale is an interesting concept inside an imperfect book, but it’s one I have kept a few nagging thoughts of. That’s neither to say it’s a book I couldn’t stop thinking about once I finished it (which is good) or a book that was immediately forgettable; it’s in a strange limbo that I feel, only a re-read will propel either way. But I strangely, for my reservations, look forward to it.